Oddly, the hot topic of discussion in wine country nowadays seems to be all about cannabis.  While legal for recreational and medicinal use for the most part in California, like it or not, cannabis farming has become a $4.4 billion booming business and is still growing.  No pun intended.

While somewhat reluctant to broach the subject while wine tasting in Sonoma County a few days ago, the banter was always lively and engaging, no matter who you asked.  In a short time, I learned that the majority of cannabis was grown in Humboldt County, processed in Mendocino County and distributed widely in Sonoma County, and that Napa County was not at all amused.

While Driving along Highway 116, I caught several wafts of fresh cannabis on alternating days, which caught me slightly off-guard.  A fun fact – Santa Rosa Jr. College offers an agricultural hemp program to teach students about the hemp industry, focusing on plant science, soil and plant nutrition and cultivation as well as marketing hemp products to consumers.

Another fun fact – apparently, there is a specialty market called Solful in Sebastopol where “soccer moms” reportedly line up for cannabis infused products.  I’m not sure why this surprised me, but it did.  All this may be the makings of a good Netflix series.

Like anything controversial,  there are several train of thoughts about whether cannabis should be melded with California’s $42 billion retail wine empire.  A random sampling of tasting room hosts, winemakers and cannabis and wine enthusiasts along my travels, all felt very strongly about their reasons for keeping the two industries separate.   Speaking on behalf of the wine purists and those not interested in having cannabis farms near their homes, schools or place of business, this collective group was opposed to the pungent aromas permeating the air, even detectable with indoor growing operations. END_OF_DOCUMENT_TOKEN_TO_BE_REPLACED

Believe what you may, but Ojai’s spiritual vortex is very real, super calming and guaranteed to soothe the soul.  A 14-mile trek up Highway 33 from Ventura connects nature and casts good vibes to all those who visit and live there.  The actual town of Ojai is nestled along a winding country road lined with old oaks and majestic redwoods in the Topatopa Mountains.  A known burial ground for the Chumash Indians,  the translation for Ojai is ‘moon’, which probably explains the immense spiritual energy present connecting nature and visitors alike.  Artsy shop owners in downtown’s Arcade warmly welcome visitors after a long year’s closure, and eclectic spiritual boutiques on the back streets wistfully display their colorful clothing and spiritual wares. 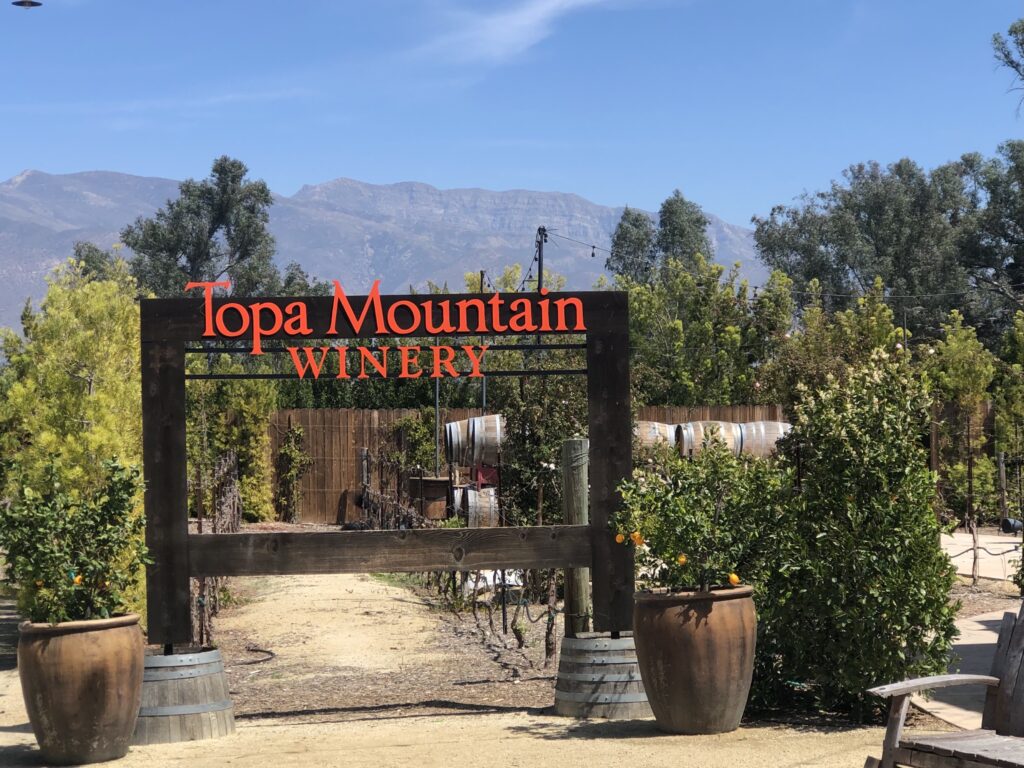 As a curious enophile though, Topa Mountain Winery was a natural point of interest.  Excited to experience Topa Mountain Winery’s wine tasting featuring Santa Barbara and San Luis Obispo AVA wines, we settled in for a relaxing afternoon of sunshine and stellar wines. 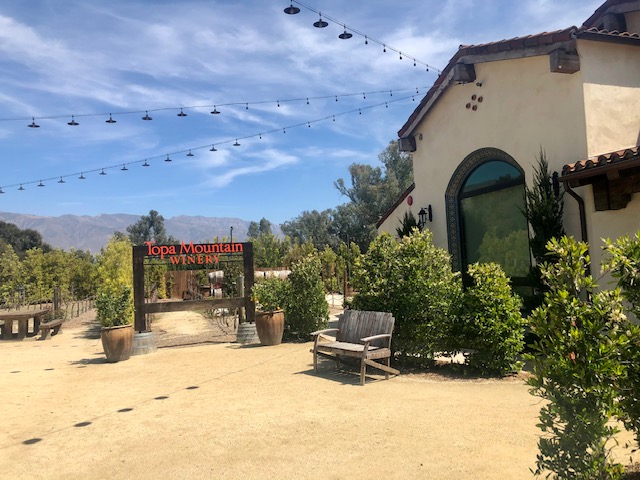 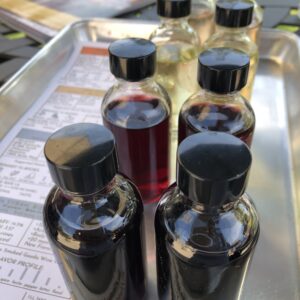 Topping the score sheet was the 2017 Blend 150, scoring 93 points from Wine Enthusiast, a Rhone blend of Grenache and Syrah from Demetria Vineyards in Santa Ynez.  Expertly paired, I might add, with the fig and olive tapenade and organic crackers.  And not to be overshadowed by the opulent 2016 Syrah Bien Nacido from Santa Maria AVA.

All of the wines along with the gracious service proved to be a memorable experience at Topa Mountain Winery.  Also noteworthy is, that the winery is dog-friendly and encourages a BYOPL (Bring Your Own Picnic Lunch) vibe.  An excellent way to while away the hours in sunny peaceful Ojai. 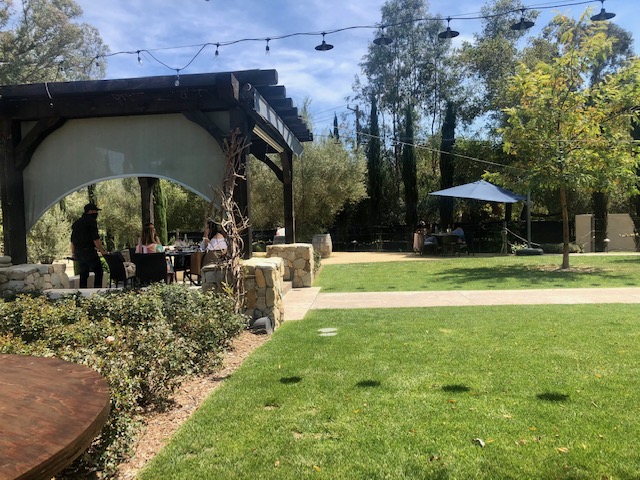 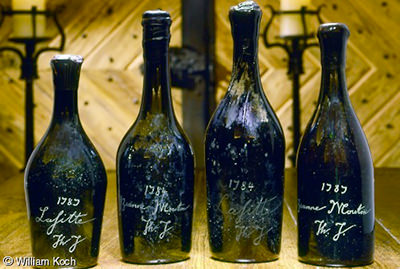 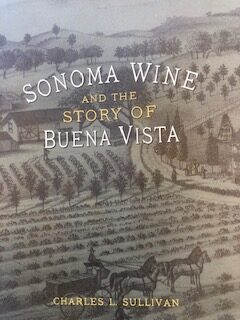 For the discerning wine geek on your holiday list, Sonoma Wine And The Story of Buena Vista would be a most welcome read.   Modern California wine historian Charles L. Sullivan offers a fascinating detailed perspective on the state’s 200+ year viticulture history complete with vintage photos and colorful anecdotes.

Many Italian immigrant farmers found their way first to the “promised land” and successfully planted the vineyards with their native grape varietals, many of which remain today.  Others with “deep pockets” and little farming skills became large winery owners or shipping magnates. 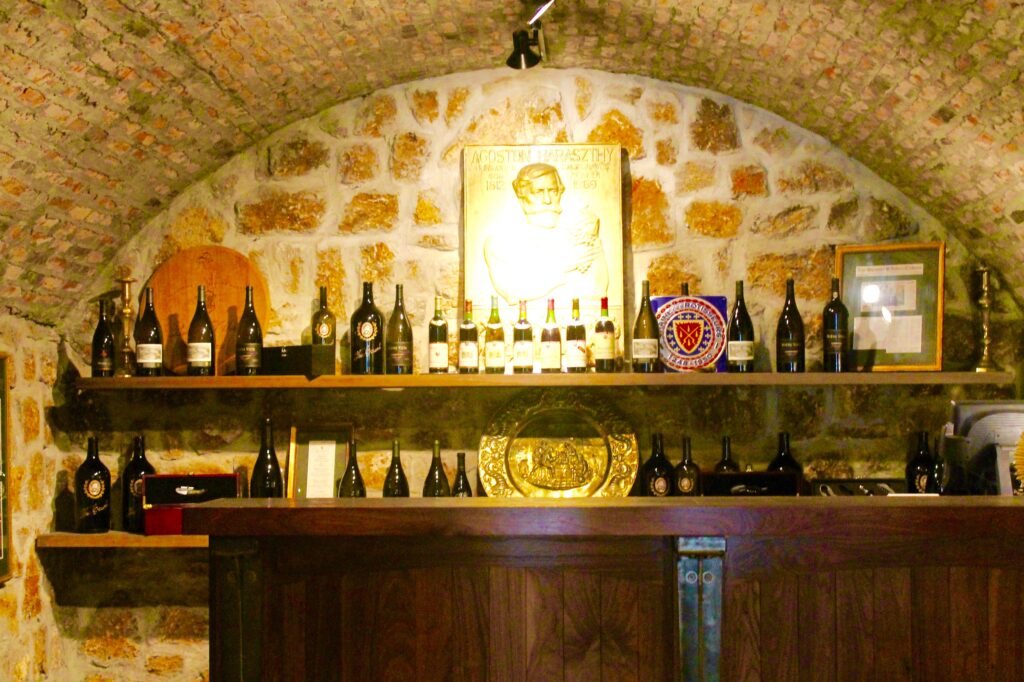 By far, the most intriguing chapters of Sonoma Wine trace the tumultuous early years at Buena Vista, California’s oldest premium winery, through the acts of brillant, yet quixotic founder Agoston Haraszthy in 1857.  Add the aftermath of the Gold Rush, the devastating plague of phylloxera and the dry years of Prohibition to the mix and it becomes a novel worthy of historical fact and reflection. 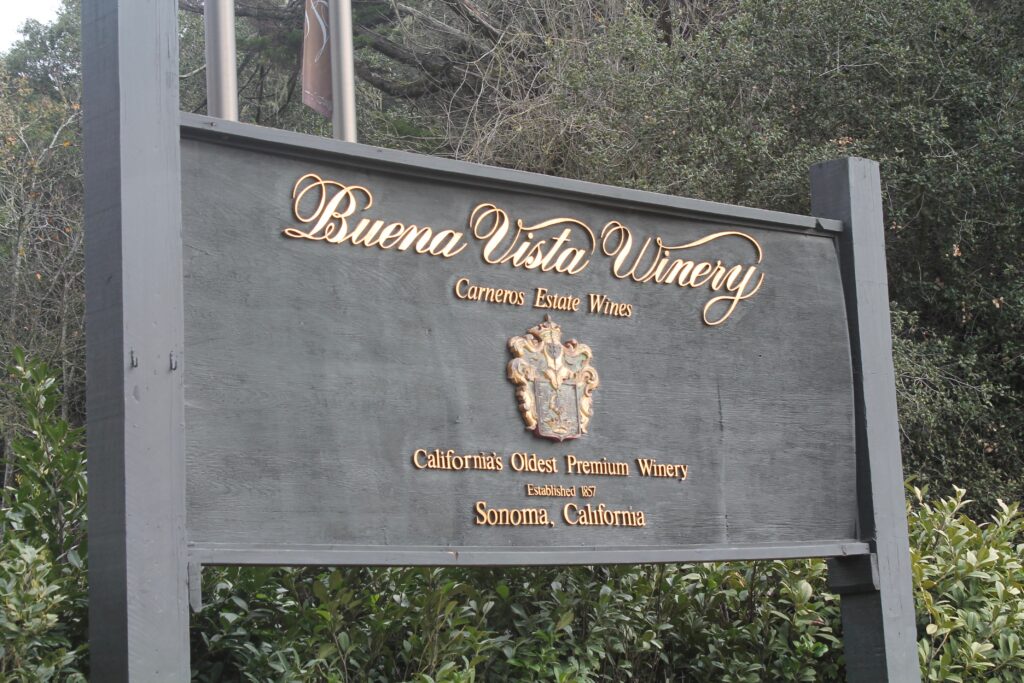 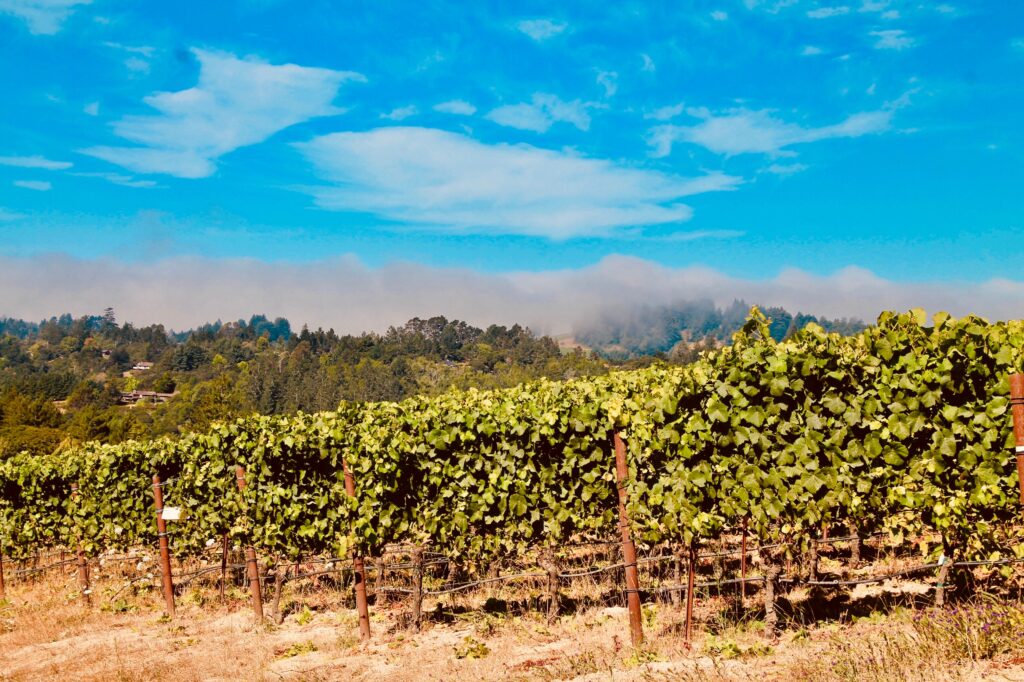 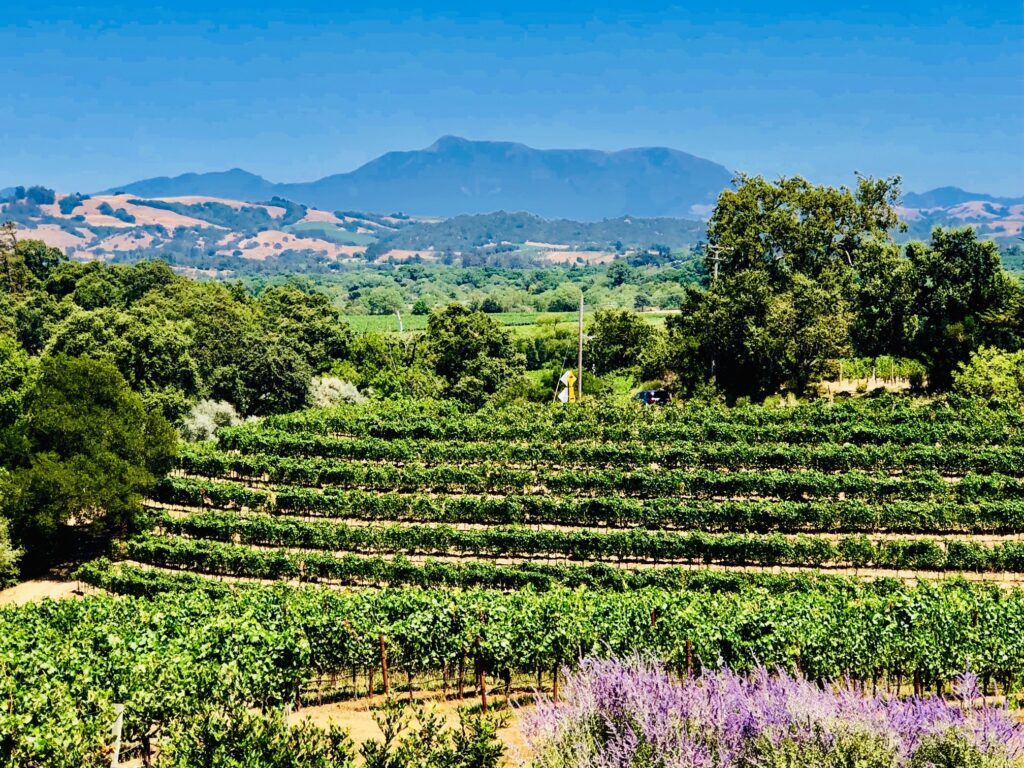 Last week, Oregon’s Governor Kate Brown announced that a two-week statewide lockdown will begin November 18th, shuttering all restaurants, bars and tasting rooms for on-site consumption, both indoor and outdoor, to help slow the spread of Covid-19.  Many wine industry experts fear the same will happen in California in the coming months.  For now, wineries statewide are struggling to keep the outdoor patio areas open for tasting and bottle sales during the cooler fall temperatures.  It is no surprise that the big winners are the party rental companies who supply the canvas tents, tables, chairs and portable propane heaters.  Several wineries in Russian River Valley are being proactive and constructing permanent covered outdoor seating areas, hoping to attract visitors in the off-months, weather permitting. 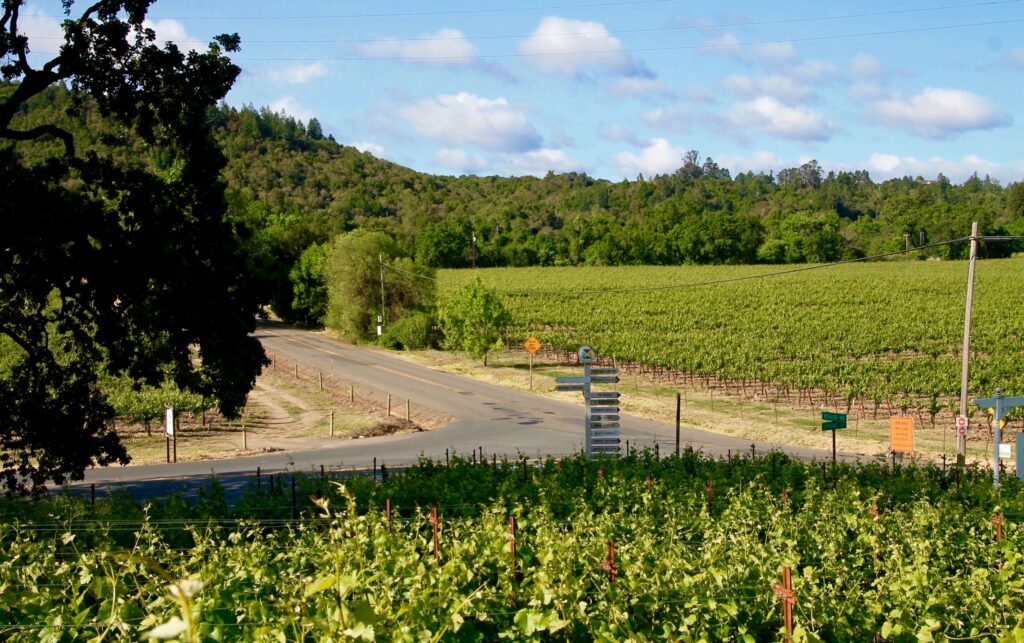 In the meantime, as we all wait for the return to “normalcy”, check out the myriad of virtual wine tastings and events offered online.  High-end wineries offer personalized virtual group tastings  which bring family and friends together in a fun, festive way.  So raise your glass high and support your favorite local wineries and order holiday wines online!  Cheers ~